Triumph Motorcycle enters the premium middle weight roadster segment with the new Trident 660. This naked motorcycle is set to launch in India in early 2021 and will be brought in as via the CKD route.

The Triumph Trident 660 has been opened for pre-bookings at company dealerships at Rs.50,000, form today. This booking amount is 100 percent refundable till the price is announced. Trident 660 will enter the company lineup in India which currently comprises the Street Triple RS and the Street Triple R. It has been launched in the UK at GBP 7,195 relating to around Rs.7.11 lakhs.

Triumph Motorcycle has also confirmed a special finance scheme for buyers of the new Trident 660 at an EMI of Rs.9,999. However, this offer will be for a limited period only. The Triumph Trident 660 is slated to be priced below the Triumph Street twin and will serve as an entry price point into the Triumph brand.

Set to attract the attention of a younger segment of buyers in the country, the Triumph Trident 660 commands a sporty and muscular stance. It receives four colour schemes, a contemporary design, LED head lamps and a curved tank. The LED tail lamps are integrated into the tail along with rear turn indicators. It also gets a round console with a fully digital unit showing information such as speed, revs, fuel level and gear selection. 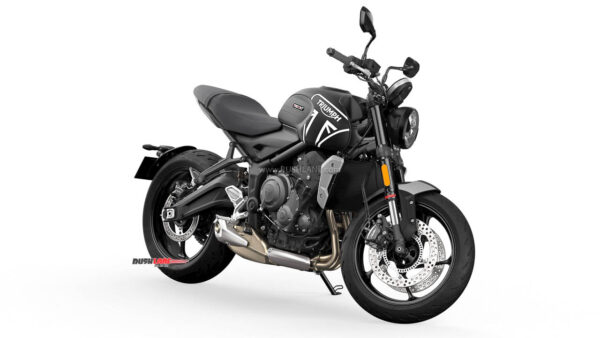 The bottom half is a TFT coloured panel offering the rider electronic aids and smartphone connectivity. Tapered handlebars and teardrop shaped mirrors are also a part of its features. The new Trident has traction control and two riding modes of Rain and Road. Traction control can be switched off while it also receives dual channel ABS.

The Triumph Trident 660 will be powered by a 660cc, inline, 3 cylinder, liquid cooled engine making 79.8 hp power at 10,250 rpm and 64 Nm torque at 6,250 rpm. The new roadster will sport a 6 speed gearbox that would be accompanied by a bi-directional quickshifter as an option.

The bike will sport Showa suspension setup and braking via twin piston Nissin calipers with twin 310 mm disc in the front while it will ride on 17 inch alloy wheels fitted with Michelin (Road 5) high grip tyres. The motorcycle will have kerb weight of 189 kgs and this will ensure good power to weight and torque to weight ratios.

The company has stated that the motorcycle will come in with 16,000 km service interval and a 2 year unlimited mileage warranty. The new Trident will compete with the likes of the Kawasaki Z650 in India.