TVS Motor Company has reported 4 million sales milestone for its Apache series. Launched in 2005, Apache series growth is fuelled by demand from what the company terms as ‘young and aspirational riders’. Apache Series ranges from 160cc to 310cc. The range topping unit is a result of the auto manufacturers association with BMW Motorrad.

The 4 million global sales milestone has brought much cheer to the manufacturer’s production arm, and has been celebrated with activities that relied on rider contributions and camaraderie. Maybe a bit too much cheer having presented the event as a world premiere, a historic moment, and one wherein the chequered flag was about to be waved.

First thoughts based on that bit of oversharing was a chance hope of the RR 310 being introduced in a new avatar; given that BMW G310 GS, and G310 R were launched last week. Furthermore, the company has a race-spec RR 310, which is already in use when reaching the chequered flag.

But well, thoughts being thoughts, none of that panned out. And the Monday morning premiere was simply an announcement to establish units sold. Sales reported is cumulative of domestic market and exports, and a momentous occasion that’s culminated from 15 years of Apache brand building.

TVS Motor Company recently announced the launch of a more affordable variant of Apache RTR 200 4V. The new variant comes with Super-Moto ABS functionality which is essentially a single-channel ABS. TVS claims that this feature allows incredible stopping power which is accompanied by impressive braking control. 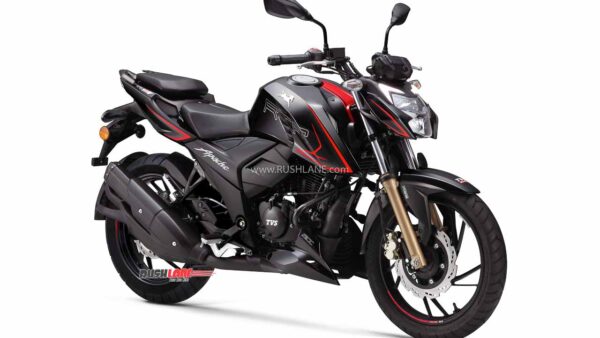 The Apache RTR 200 4V draws its power from a 197.75 cc, single-cylinder, four-valve, fuel-injector motor which cranks out a maximum power of 20.2 bhp at 8500 rpm and 6.8 Nm of peak torque at 7,500 rpm. It is mated to a five-speed gearbox. This motor is equipped with a race-tuned fuel-injector which is aimed to provide an exhilarating performance.